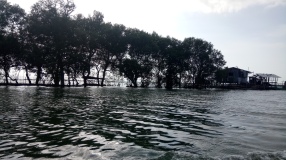 Manila, Philippines – “If there is a government agency that should oppose reclamation projects, it must be the Bureau of Fisheries and Aquatic Resources (BFAR) that has declared some parts of Manila Bay as fish conservation areas,” according to the activist fisherfolk group Pambansang Lakas ng Kilusang Mamamalakaya ng Pilipinas (PAMALAKAYA-Pilipinas) demanding the BFAR to back the sentiments of the fisherfolk against reclamation projects in Manila Bay.

Data from the BFAR shows that there is an existing conservation area for sardines in the southeastern part of Manila Bay which numerous reclamation projects will be found – including the 318-hectare Manila Waterfront City, the 419-hectare Horizon Manila, the 407.42-hectare New Manila Bay International Community, and the 50-hectare expansion of Manila Harbour Centre. The BFAR-declared conservation area, the group further added, lies the concentrations of fish larvae, phytoplankton, nitrate, nitrite, phosphate, and silicate that all play a significant role to the marine ecosystem.

“Reclamation will effectively destroy the same amount of sea grasses and soft-bottom communities that serve as the spawning ground and habitat of variety of marine life. Moreover, they are the primary sources of livelihood for fisherfolk and food supply for the entire country. Allowing reclamation projects to happen will defeat the purpose of the government programs to conserve fish species and other marine resources. The BFAR should issue a public statement denouncing the reclamation projects pending throughout the Manila Bay and advance the protection of its marine life to improve fisheries productivity,” Fernando Hicap, PAMALAKAYA National Chairperson said in a statement.

PAMALAKAYA earlier denounced the taking over of Office of the President (OP) to the Philippine Reclamation Authority (PRA) which will take charge on the approval of reclamation projects, saying this will not only further concentrate the power to President Rodrigo Duterte, but moreover will fast track the transformation of Manila Bay from productive fishing grounds to a massive industrial and commercial hub through reclamation.

“Now more than ever is the high time for BFAR to exercise its mandate in preserving the fish species and protecting the livelihood of the Filipino fisherfolk from destructive projects by openly deploring reclamation and back our call for a genuine rehabilitation of Manila Bay,” ended Hicap. ###